Polygiene AB (publ) (”Polygiene” or the ”Company”) today announces that the Company has entered into a conditional agreement on acquisition of the privately owned UK based company Addmaster Holdings Limited (”Addmaster”), a leading global supplier of antibacterial additives for hard surfaces. The purchase price, on a cash and debt free basis, amounts to in total approximately SEK 374 million, where approximately SEK 249 million is paid in cash and approximately SEK 125 million is paid through 4,564,174 newly issued shares in Polygiene. The cash payment is intended to be financed through a directed cash new issue in Polygiene, which Polygiene intends to carry out following an accelerated book-building process in accordance with a separate press release. The completion of the acquisition of Addmaster is conditional on the total issue proceeds from the directed issue amounting to at least SEK 280 million and that both the directed issue and the issue of the consideration shares are approved at an extraordinary shareholders’ meeting.

The acquisition of Addmaster

Addmaster is Polygiene’s supplier of antimicrobial additives and the companies have had a strong partnership for over 12 years. Addmaster is primarily active in hard surfaces, which complements Polygiene, that is active in textiles and soft surfaces, well. The Company believes that there are significant synergies within the companies' customer bases because Addmaster’s customers demand soft surfaces and Polygiene’s customers demand hard surfaces. The Company estimates that there is a potential for total synergies of a total of approximately SEK 61 million in increased EBIT during 2021-2023, of which approximately SEK 55 million stems from additional sales and approximately SEK 6 million stems from cost savings in logistics and administration.

Paul Morris, founder of Addmaster, and Sandrine Garnier, Managing Director in Addmaster, will continue to be active in Addmaster following the acquisition.

”The transaction is a milestone in Polygiene’s history and from a strategic perspective very logical given the great synergies that exist between the companies. Through the acquisition, we can strengthen our position in the market with a much broader offering, which will accelerate our already strong growth” says Ulrika Björk, CEO of Polygiene.

”I am very excited to be part of bringing two leading companies together to create a global powerhouse in the antimicrobial market, utilising our joint strengths of branding, technology and organization” says Paul Morris, founder of Addmaster. 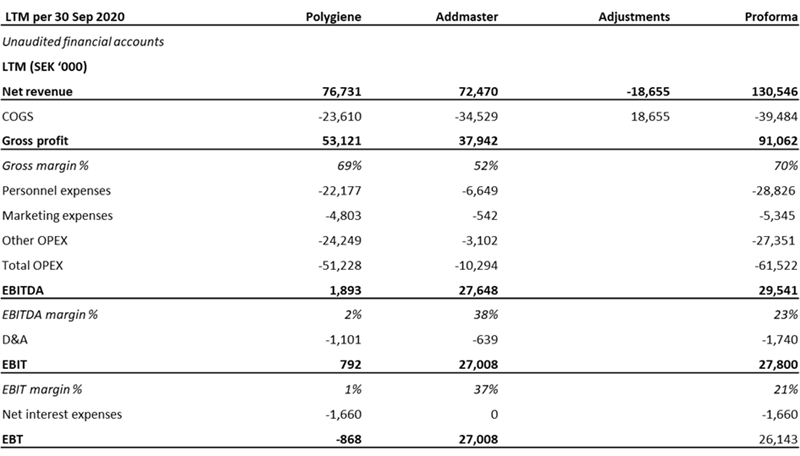 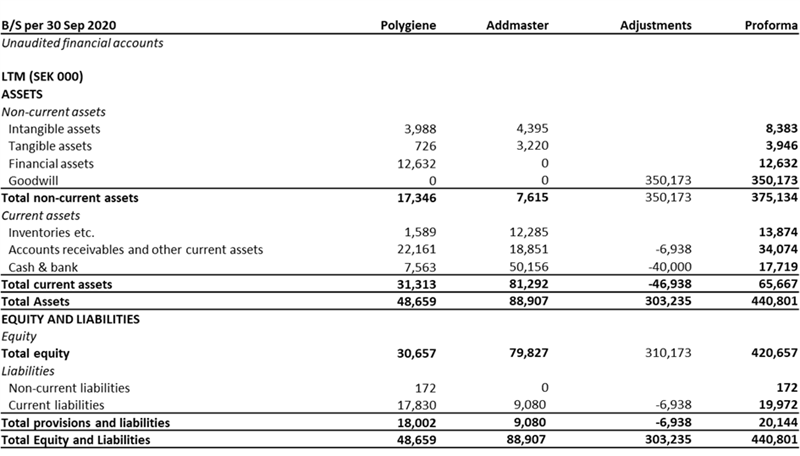 Further information about the acquisition and the preliminary unaudited consolidated balance sheet and income statement can be found in an investor presentation published on Polygiene's website today.

The completion of the transaction is, in addition to customary contract terms, conditional on Polygiene carrying out a directed cash new issue of at least SEK 280 million to finance the cash part of the purchase price, transaction costs and working capital requirements. Polygiene has appointed Pareto Securities AB as Sole Manager and Bookrunner in connection with the directed issue, which will be initiated through an accelerated book-building procedure shortly after the publication of this press release. The completion of both the directed cash new issue as well as the issue of the consideration shares is further subject to approval at the extraordinary shareholders’ meeting, which, if the directed issue is secured, is planned to be held around December 30, 2020. Notice of the extraordinary shareholders’ meeting will be published in connection with the announcement of the outcome of the planned directed cash new issue. Shareholders who together hold approximately 28 per cent of the total number of shares and votes in Polygiene have undertaken to vote for the issues at the extraordinary shareholders’ meeting.

Subject to the extraordinary shareholders’ meeting resolving to approve the issues, the acquisition of Addmaster is expected to be completed around January 11, 2021.

This information is such information as Polygiene AB is obliged to make public pursuant to the EU Market Abuse Regulation. The information was submitted for publication, through the agency of the contact person set out above, on December 10, 2020 at 17:31 CET.